230 million people live in a country they were not born in, if it was a separate nation, it would be the fifth largest country in the world. This statistic is our starting point for the project we intend to develop. As a group of artists from different ethnic and national background, we have an abiding interest in the status of migrants in European society and the lives of the diaspora, with a special focus on the obstacles, discrimination and pressure they face. With so much press dedicated to the negative impact of immigration we feel the need to do something to re-address the balance and be part of a more nuanced debate.

The spectre of “the others” is always present, “foreigners” invading our shores, stealing our jobs, taking our benefits, cloggging our hospitals, speaking threatening mysterious idioms and pracitising suspicious religions… But who are the “migrants”? Are we sure we know these people we’re supposed to be so scared of? Are we sure we couldn’t be them one day, if God forbid our Western societies should collapse and we should find ourselves threatened by poverty, war or simply unemployment? 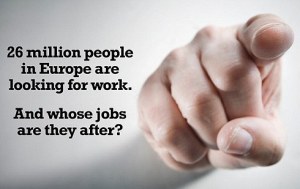 The debate over immigration has turned people on each other. Has made people in sedated white only seaside towns terrified of “Eastern Europeans, Muslims, blacks!” No matter none of such communities live there, they might take over if we don’t stop them… “They”…

The ones who speak different

The ones who eat smelly food

The ones with all those kids

The ones who are happy to work for less (usually because there are employees happy to pay them MUCH less, but never mind that)

But what does it mean to be the citizen of the fifth largest country in the world? And what are the norms and values of this new space that they have created? How does it transform the host country? What pushes a person to leave everything behind? It could be a desire to explore, the consequences of war, economic hardship, persecution or simply a job offer. A recurring theme of our pilot session at Migrant Voice was the normality of the lives these people had prior to departure (even refugees fleeing warzones had school exams, family homes, birthday parties before their lives were torn into pieces). The strive to succeed. And the sense of dislocation and otherness they have to contend with, even when they’ve been living in their “new country” for decades. This is what we’d like to explore: the shared experiences. The geography of this new place they’ve created.

As artists, we felt it was our duty to explore all this. Our goal is to create a big project for, with and about migrants.  We’d like to engage as many people as possible – migrants, expats, asylum seekers, refugees, international students – to hear their stories, encourage them to express their voice, find a way to represent their experience in dramatic form if possible, creating moments of community performance inspired by Augusto Boal’s Theatre of the Oppressed. We’d like eventually to devise and write an original show inspired by the stories we’ll hear, take it back to the people who generated the material, opening up to discussion.

The first step, of course, if meeting people. Gathering stories. Making simple theatre. We started a month ago at Migrant Voice, a charity run by two amazing women Nazek Ramadan and Anne Stoltenberg, who’ve decided to dedicate their lives to literally getting migrants heard. We organised a tester workshop with a group of people willing to share their stories. And what an evening it was! If we ever had a doubt theatre can be relevant and necessary, and able to create a “charged” atmosphere that gives participants – performers and audiences – a sense of empowerment and freedom, our session at Migrant Voice swept all doubts away. It was intense and beautiful, in two an a half hours people from all over the world and very different walks of life, became a unity where stories were shared together with tears, sobs, laughter and jokes. Some participants dares telling stories about their painful experiences they’d never told anyone before and we felt humbled and honoured that they felt “safe” and welcomed enough to do that.

This is what we want to do. Listening, enabling, gathering. We want to help give a voice to these people everyone talks ABOUT but not many people bother to talk TO.  We’re now reaching out to other charities, associations, organisations to take this project forward. When an anonymous mass of “migrants” become a group of individuals with the same human experiences as everyone else, it’s harder to discriminate. Or at least we hope so.

If you’re interested in finding out more, if you’re a migrant who’d like to take part in a workshop, talk to us – even anonymously – or if you run a charity or group who would like to collaborate with us, please contact us at info@legalaliens.org

Because of the Covid 19 emergency, we regret to inform that all LegalAliens' activities are currently suspended, except for our weekly online sessions for migrants and refugees.

It's a very tough time for us and anyone making theatre, but we hope to be back as soon as it's safe.